How the Millfield Prep Chaplaincy Wellbeing Dog Helps Our Pupils 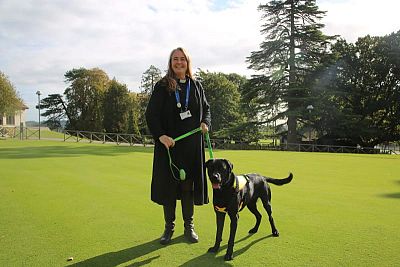 I joined Millfield Prep School in September 2014 as a lay chaplain who was exploring ordination. Whilst it was a sideways move from being a Deputy Head Pastoral, for me it had all the elements of pastoral care and spiritual provision I had enjoyed in my previous role.

In the summer holidays of 2019, we welcomed a puppy named Sir Nigel, who was just 9 weeks old, into our lives. Over the next year, he made visits to see Millfield Prep pupils in their boarding houses as part of his training and in September 2020, I was ordained Deacon and Sir Nigel became our Chaplaincy Wellbeing Dog. The children joke that we both got dog collars! I have found that the journey towards both ordination and becoming a chaplaincy dog took a similar, long path!

Why a dog? Well, I have always wanted to add a dog to the family and, having moved to a job living on the school campus with a garden, it seemed the perfect time to make a furry addition to the family. I have two teenage boys and I felt that adding a dog to the family
would benefit them through their teenage years, hoping that if they didn’t want to talk to mum then hopefully, they could talk to the dog. It’s certainly paid off, and Sir Nigel helps them with homework, gives them cuddles, helps them play PS4 and they actually want to
get out of bed to take him for a walk! Getting out in the fresh air every day for a walk as a family during lockdown has been invaluable; no devices are needed; they argue over who will have the dog and they run around and talk to each other and occasionally us parents! I also was looking to add something new to chaplaincy.

I had read lots about the work of therapy dogs, reading dogs and school dogs, and was very keen to find out more about how this would work in a school context. Many of these require the school to own the dog,
undergo expensive assessments, or the dog comes in to visit with an outsider. This was not going to work, so I had to create something more bespoke.

I researched the most suitable dogs for the role, looking into whether we could adopt a retired guide dog. However, I felt that as bereavement is part of the role of taking on an older dog who might have complex medical needs, this might not be the wellbeing addition I was looking for.

Rescue dogs are fantastic but unfortunately not suitable for this role. I
needed to know their history pre-birth to birth and beyond. In the end, I decided that we wanted a black gun dog Labrador from good stock that we could train. I had settled on a male dog, as they usually have a calmer temperament, and I was not wrong in this case. The search began, and after lots of conversations about what I was looking for, I found a breeder
who understood what I was after and we were invited to be interviewed and to meet the puppies. Now, I don’t know if it is a coincidence, but Sir Nigel loves tennis balls and the breeder worked for Wimbledon! Her bitch had been bred with the chair of the Gun Dog Association. The breeder was excited by the prospect of him becoming a wellbeing dog. My
children choose Sir Nigel and a collar was placed on him - we now had to wait another five weeks until we could take him home!

What does Sir Nigel bring to chaplaincy? He does not ask questions, he does not judge, he loves everyone (and even those who don’t like dogs get converted after meeting him). He helps those who are anxious, both pupils and staff, formally in a one-to-one session, or informally on a group walk or if pupils pop in. He takes tutor groups on wellbeing walks, where they can engage with nature, chat and also take turns to walk the dog. For some pupils, this is a familiar experience, for some it is new and for some of our boarders away from home, this is something that they miss.

Like chaplaincy, Sir Nigel is just there; it is the power of being. He does like the odd treat, but he does not bark or growl, he is very patient, and he just loves people. He does not assume anything; he waits to be invited in and brings joy. When I am not well, he knows, he won’t leave my side and stays to look after me. He knows people by name and is quick to
pick up instructions. He understands so much!

Wellbeing may be the word of the moment, but it is very much about the care of noticing others and paying attention to ourselves too. It is about connecting body, mind and spirit and is such a bedrock of any school. You only have to get a sense of the staff wellbeing to understand the school’s underlining values, where the focus is, and what is important.

Mental health awareness is very important and speaking about it, being proactive in raising issues, sign posting and just being there is key. A major aspect of the work of a school chaplain, but I would also argue of all staff, is to notice each other and to care for one another.

What training did Sir Nigel have? We trained Sir Nigel not to eat the cat food (we have three cats), never to eat food without being told, to lie in his basket, and all the other normal social expectations, but we also made sure he was sociable and that he could follow
commands. Before he formally came into school, we informed the staff and parents, wrote long risk assessments, and he was signed off by the vet and a dog trainer. Of course, I also asked our Headteacher! The real test was the first time he met the children, and they just loved him. He is now very much part of the pastoral team at school.

I do not assume to be any sort of expert on Chaplaincy dogs as they are not a formal thing, but I wanted to bring something different to school chaplaincy. So, to some extent he is a pioneer minister. He is not in school every day, yet as I live on site, he can be retrieved from
home for any emergency pastoral care needs during the day. Dogs need lots of rest during the day, so he cannot be over stimulated. He has a special harness when in school so that he is visible (especially to those staff and pupils who do not like dogs or are allergic) and a lead
that says friendly on it!

I have made some rules for him and there is a distinction between
teaching and chaplaincy, so as a result he does not come with me to my Religious Studies lessons unless it is planned, or we go for a wellbeing walk. Pupils wash hands after touching him and, at this stage, I do not lend him out to other staff; he stays with me as I am ultimately in control and responsible for him.

Chaplaincy in a pandemic has been very much something we cannot plan for. Sir Nigel has appeared in chapel services and assemblies online as well as at school, for those who were keyworker children. Right from the start, Sir Nigel could give affection in a world devoid
from the power of touch. He can speak in a way that often we cannot when a pupil is anxious or worried. He brings a sense of joy to a pupils and members of staff when they need to be cheered up.

Chaplaincy is edgy, pastoral care cannot be prescriptive, you have to adapt to the situation and respond in a prayerful and sensitive way. I do not sit still; I have to constantly change and review, and often find creative solutions. Sir Nigel brings another dimension to my ministry.

Chaplaincy dogs may not be for everyone, but here in Millfield Prep at this moment it does work, and he brings many blessings and much joy to my family and to the school family, so that makes him a treasure.