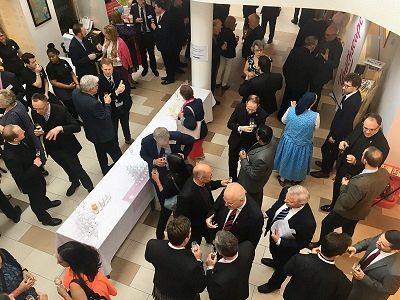 An exciting new initiative, funded by the Jesuits in Britain and the Woodard Trust was launched at the fifth national Chaplains' Conference. The Centre for Chaplaincy in Education is an ecumenical venture to resource and develop Christian chaplaincy in schools and colleges around the country. They intend to offer training and formation to chaplains, providing a national recognised qualification for those wishing to enter chaplaincy, and eventually developing a masters level qualification too. As well as raising the prestige and quality of chaplaincy provision it will play a key role in advocating for chaplaincy in education. Newman University in Birmingham will be a key partner in this.

The Centre was launched at the fifth National School Chaplaincy conference which was attended by chaplains from Jesuit Schools, Anglican Schools and Methodist schools. Fittingly held at Liverpool Hope University, itself the fruit of the collaboration of Archbishop Warlock and Bishop Shepherd in the 80’s, the title of the conference was ‘Where the Spirit Leads’. Delighted by the results of the conference, Canon Brendan Clover, the Senior Provost of the Woodard Schools, said, ‘This is a unique opportunity for our chaplains who are at the sharp cutting edge of the church in this land to come together to be renewed and reinvigorated by the spirit in order to live their ministries.’ The conference, which lasted three days, had a variety of speakers and workshops to engage and resource chaplains inlcuding:

Jimmy McGovern talks to the chaplainsFr Adrian Porter, the Jesuits in Britain delegate for education, said ‘This conference has been a wonderful opportunity to gather Christians from all kinds of backgrounds together to see where the Spirit leads and just learn how to do chaplaincy better.’ The ever-widening group of chaplains will gather again in two years’ time. It was interesting to hear from Revd Mike Haslam, based in the Diocese of Bath and Wells, about the upsurge in interest from people wanting to go into chaplaincy and also in what a resident chaplain can offer young people as they accompany them through volatile and complicated times. The need for chaplains is only going to grow as is the need for well trained chaplains to accompany young people who are showing a greater interest in and openness to the Gospel.

Praying for our Emergency Services

Some News from Taize January 2020